Ripples is a 1+ person worldbuilding game, which uses cards to explore a setting from the lens of a single person's influence. That person might be directly influencing big events, or subtly influencing them across time and space in a more indirect, butterfly effect-like way. This person-out approach to history and worldbuilding is meant to help provide a sense of interpersonal legacy that can be lacking when purely placing big events on a timeline.

For reference: it took me about 10 minutes to cut out all the cards cleanly, and I found a single play-through to last about 15-20 minutes. The base cards are probably good for at least a few playthroughs.

Ripples was primarily created as a personal experiment in RPG design and publishing. I consider it to be in a late beta state. I'd be interested in getting constructive feedback on it (best emailed to symphoneers@gmail.com) , but don't have plans for any extensive additions or refinement. If I ever do significantly add to or refine it, I'll probably bump the minimum price up to $2 or something.

In order to download this game you must purchase it at or above the minimum price of $1 USD. You will get access to the following files:

Support this game at or above a special price point to receive something exclusive.

Hi, I just played it and it was a pretty nice and quick world building game-tool, focused on the impact of your character in the world events. It may be too general when the card doesn't evoke anything for us, but it's perfect when an idea comes directly in your mind

Below is my game, which took between 30 minutes and 1 hour.

This is the story of a person named Tykha. Only time will tell if their legacy endures.

Tykha created something. In fact, it was not an invention but more a discovery: the discovery of a small old book... one of his friends was obsessed with re-creating these lost objects. The new common goal of some scientists was to find out what it had been used for human beings in the past

This scientific research leads to the re-invention of the production of ink and paper… But at that time, the printing press process was still forgotten, so this re-invention was a tiny unremarked news outside the scientific community.

3/ The corruption changes what food people can get / INDIRECT – IMPRECISE

Meanwhile, Tykha was in the wrong place at the wrong time (or maybe right place and right moment?). Tykha was out at night, at a forbidden time of day and heard people in the streets… without having heard the discussion specifically, it seemed terrifying.

4/ The leader change the thing nobody talks about / DIRECT - RUSHED

Tykha decided to write in ink on huge sheets of paper, to ask the people not to keep quiet any longer. Throughout the whole City, we can read these messages: “can we talk about strange power cuts, at a fixed time?” ; “aren't you tired of having to follow the life imposed by the high-ranking people?” ; “what do you think about in the morning?” ; “do you want to get up and do the same thing as yesterday?” ; “what are these noises you hear at night and why are some streets closed at night?”; “did you know that there were once free thinkers?”; “what is the job the chief has assigned you? would you like to do something else?”; “Who are these people you can see if you go out when the streets are supposed to be empty and people are supposed to sleep?” ; “Who are you?”… and a lot of other questions, written in different sizes, in ink with hand as a brush.

The leader of the city decided to get all these posters removed then tried to find out who was behind these messages. But Tykha was operating in one night and the posters seemed to reappear every time more numerous… Actually, more and more people followed the posters idea.

5/ The outsider changes who could make art / INDIRECT - ELABORATE

According to the skills of each person, new form of art are developing: digital support are mixed to paper and ink. And the revolt of the walls began. From the smallest poem written on a wall to the most gigantic video projection, walls will no longer be silenced and the people rise up in the shadows.

Result: a rather logical game about the beginning of a revolution, in a future or alternative world. Thanks for this world-building game! It's a great way to find inspiration ☺ 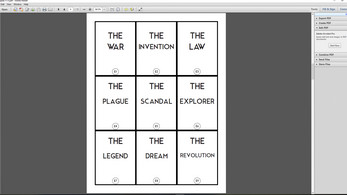 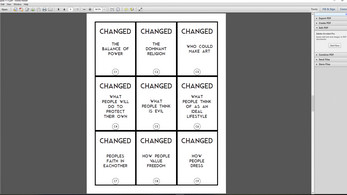 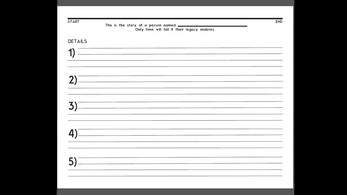